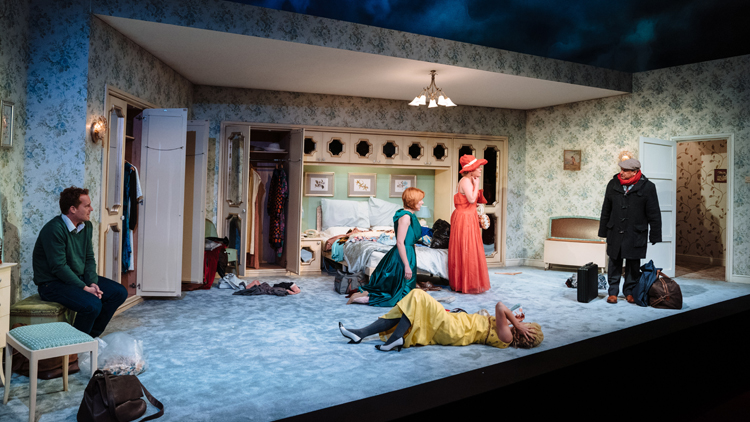 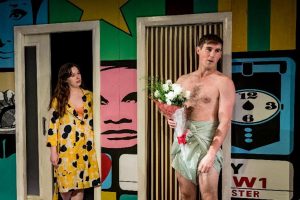 The revival of this play will bring joy to your hearts!  In an evening full of misunderstandings and complete failure of the characters at times to understand what is going on, there are plenty of laughs and much jollity to be seen.

Always worth visiting, the little gem that is the Jermyn Theatre has given us another revival to be amused by. The play by Alan Aykbourn has his usual mix of misunderstandings and confusion and is very funny.

When Greg (Christopher Bonwell) suspects his girlfriend Ginny (Lianne Harvey) of not being completely honest with him, he follows her when she goes to visit her parents. The trouble is when he arrives, they are not actually her parents (the couple are played by James Simmons and Rachel Fielding), and don’t know anything about him. Ginny arrives at the same house, knowing exactly who the man is but there are more mix ups and mistaken identity!

The production is very well designed with costumes, lighting and sets being exactly right and one of the best in-front-of-the audience scene changes I have seen.

A superb cast, well directed by Robin Herford, put across Ayckbourn’s lines with just the right amount of tongue-in-cheek humour.

THE MEMORY OF WATER 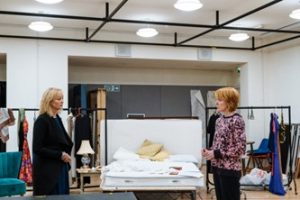 The story of three sisters who come together in the days before the funeral of their mother is well played in this 1996 play written by Shelagh Stephenson and directed by Alice Hamilton.  The sisters are very different and clash when they come together although we get a real feel of the love that lies beneath their relationship.

As they prepare for the funeral and look though the mother’s clothes, they reminisce about the past, dredging up memories which mostly differ from each other.

The sisters, Mary ((Laura Rogers), Vi (Lizzie McInnerney) and Catherine (Carolina Main) are not the only ones onstage.  We see Mum before her death and as a kind of ghost afterwards.  Also present is Frank, husband of Teresa and Mary’s married boyfriend. Their interaction is often humorous, sometimes painful to hear and at other times moving.

A thoughtful play, which is well-acted and worth catching.