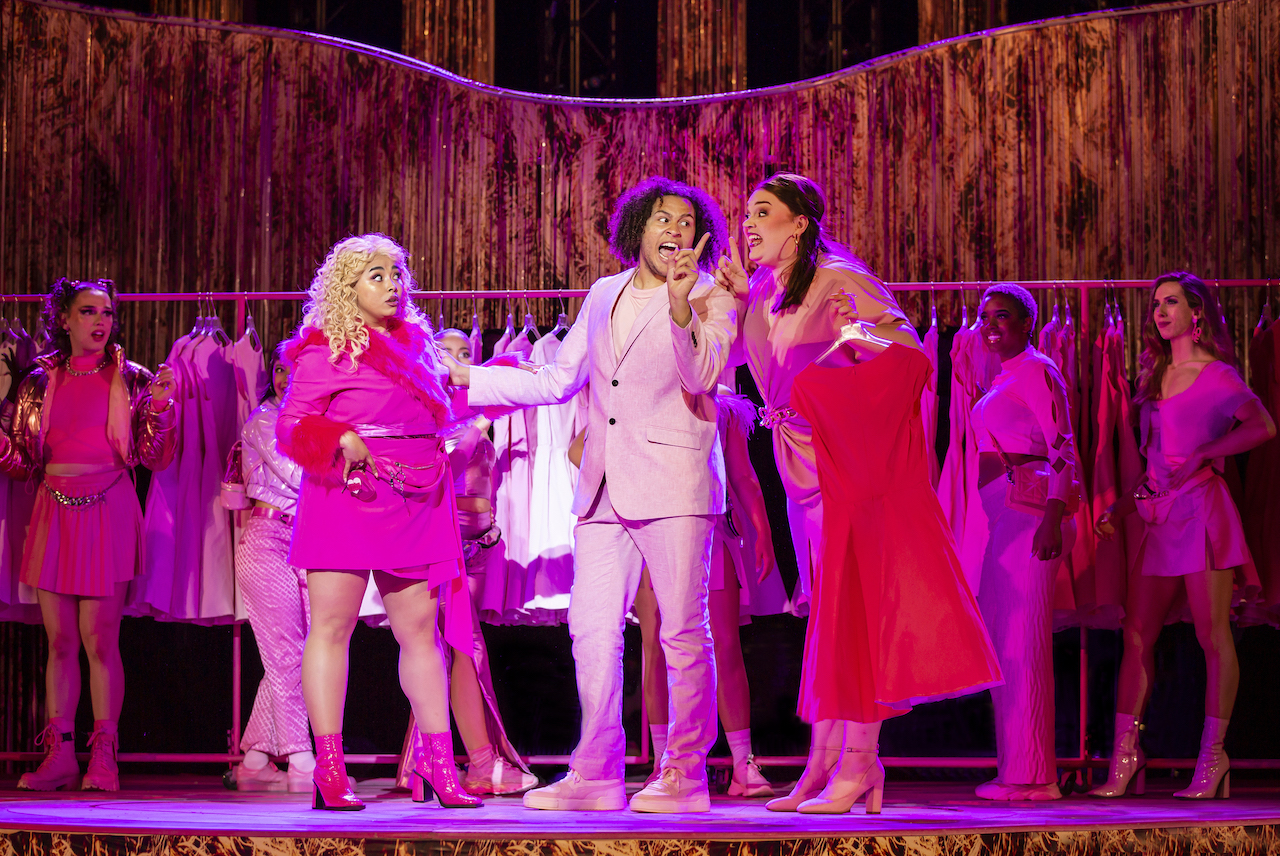 Just about to close at the Open Air Theatre, Regents Park, London, is LEGALLY BLONDE. This up to the minute production brings a real modern touch to the story of Elle Woods, a blond bombshell who enters an Ivy League school to study law as she pursues her boyfriend.  Director Lucy Moss gives us a show with a truly diverse cast of actors – mixed genders, race and body shapes.

Exciting choreography by Ellen Kane includes a difficult skipping dance by Lauren Drew who combines skipping with singing.  A joyful musical in one of my most favourite settings.  Summer has arrived!  Watch out for a future West End transfer!

Whilst this musical comedy has much going for it, the show doesn’t quite pull it off.  Lots of good bits showing Tony Blair from a child to becoming Prime Minister and handing over to Gordon Brown.  The story line is that Tony Blair (Charlie Baker) always wanted to be Mick Jagger (or Jaggers as Tony calls him) but can’t play the guitar or sing well enough.

There are songs – pleasant enough but not memorable – and some synchronised movement, but really a series of sketches with the hard-working cast playing a number of different well-known characters.  I am not sure what the advantage is in having female actors playing male politicians, particularly as there are so few actual women in the cast.  However, Holly Sumpton gives us a credible Cherie Blair.  Charlie Baker is a cute Tony Blair – he keeps the familiar grin up throughout and has good vocals.  Madison Swan gives us a rather touching portrayal of Princess Diana.

It’s a bright set with TONY lit up with flashing lights. The audience seemed to really enjoy the show and there was a lot of laughter at the many comedic moments. Harry Hill is one of the writers alongside Steve Brown.  It ends on a rousing rendition of ‘The whole world’s run by arseholes.’

Basically, a traditional production with some tweaks to give a more feminine perspective.  Although the musical is very well-known, this fresh take focusses the mind on the basic story of the flower girl who is made into a ‘lady’ by the work of Henry Higgins and his friend Colonel Pickering.

As the chief victim, Amara Okereke takes on the role at full speed.  Her cockney accent is probably one of the most authentic I’ve heard, and she is utterly believable as Eliza Doolittle, the flower girl trained to be passed off as a duchess.  Okereke has a super singing voice and acts as well as she sings.  Some spark exists between her and Harry Hadden-Paton’s Henry Higgins and there are some good scenes as he teaches her the tongue twisters.

Good back-up from Malcolm Sinclair as Pickering.  It is emotionally moving to watch the elderly Vanessa Redgrave in the small part of Henry’s mother. Director Bartlett Sher gives us a well-dressed, beautiful production of the 1956 musical by Lerner and Loewe.