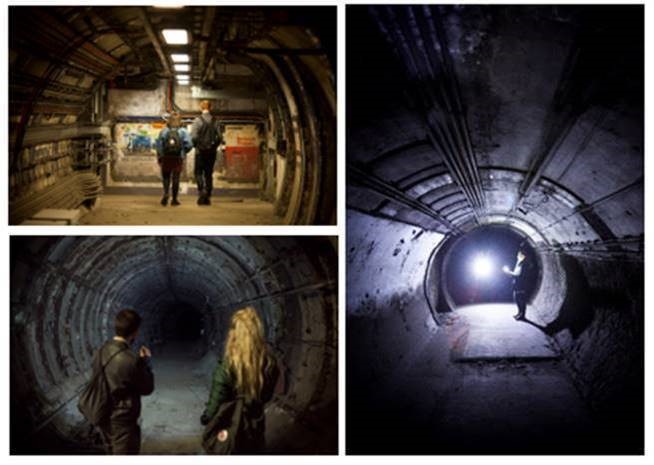 From January 2022 London Transport Museum will resume its exclusive Hidden London tours of four fascinating disused sites on the Tube network, after a hiatus of almost two-years due to the pandemic.
Tours of Down Street, Aldwych, Euston and Moorgate stations will return, offering visitors the chance to go where few have ventured before and explore underground locations with incredible stories to tell about London’s past, such as Down Street station – once a top-secret government headquarters that sheltered Winston Churchill during the height of the Blitz.
Led by expert guides with a wealth of fascinating facts and tales to share about these ‘forgotten’ parts of the London Underground, visitors will explore disused tunnels, platforms and lift shafts steeped in history that lie concealed just a stone’s throw away from unknowing modern day commuters.
Tours will run on selected dates from January to March 2022. Down Street and Euston tours from 15 January to 13 February, Aldwych and Moorgate tours from 2 March to 27 March.

A new season of the Secrets of Central London walking tour of Covent Garden, Kingsway, Lincoln’s Inn Fields and Victoria Embankment will also be on sale, starting in January 2022. Explore these areas with expert guides who will reveal fascinating little-known historical tales and titbits about the area and its transformation over the last 200 years.

Tickets for all tours will be available to London Transport Museum’s enewsletter subscribers ahead of general release, sign up via ltmuseum.co.uk for priority booking.
Tickets go on public sale on Friday 3 December 2021 via ltmuseum.co.uk/hidden-london

Tour information and dates
Run by London Transport Museum, Hidden London is a programme of exclusive tours and events across the Capital at locations rarely seen by, and usually off limits to, the public. Venturing beyond secret entrances and unassuming doorways, visitors will be led on atmospheric journeys into disused stations and concealed spaces on the Tube network. Guests will glimpse places steeped in history and hidden in plain sight around the city.

Discover a secret side to a station you think you know on a tour that explores a century of Euston’s history. Wind through a labyrinth of atmospheric passageways beneath the present-day station that were once used by the travelling public. Glimpse a bygone era through a gallery of vintage advertising poster fragments, and see the original Leslie Green station facade before the site is transformed for the arrival of HS2.

Tickets: Adult £85.00; Concession £80.00
Get an intimate peek into one of London’s most intriguing hidden spaces. Situated between Hyde Park Corner and Green Park stations, Down Street had a short life as a working station from 1907 to 1932 but became critical to winning the Second World War when covertly transformed into the Railway Executive Committee’s bomb-proof headquarters. Experience the warren of narrow tunnels where the nation’s railways were co-ordinated and Prime Minister Winston Churchill secretly took refuge at the height of the Blitz.

Experience a relic from London’s past. Opened to the public in 1907, Aldwych station was never heavily used and closed in 1994, after almost 90 years. The station has had a varied history; from providing shelter to Londoners during the Blitz, to being used for film and TV shoots including Darkest Hour (2017), Sherlock (2014), and Atonement (2007). Explore the original ticket hall, lift shafts, abandoned platforms and tunnels of this former termini of the Piccadilly line.

Explore the many wonders of Moorgate station, one of London’s first Underground stations. See an original Greathead Shield left abandoned from a planned tunnel extension in 1904 – the only complete one of its kind on the Underground network. Explore a maze of disused tunnels and track left behind from station upgrades through the years, glimpse corridors lined with original glass tiles of the City and South London Railway – the world’s first deep-level underground railway – and discover how long-disused areas of the station have been ingeniously repurposed for a modern London.

Discover the secrets of London on a walking tour of Covent Garden, Kingsway, Lincoln’s Inn Fields and Victoria Embankment. Join our expert guide and tour off the beaten path, down inconspicuous back streets to locations steeped in history hidden in plain sight. Find out how the area has transformed over the last 200 years and see abandoned transport infrastructure and remarkable feats of engineering that have shaped London.

Hidden London exhibition extended to 31 December 2023
Explore the award-winning Hidden London exhibition in London Transport Museum’s Global Gallery. Bringing together the largest number of rare archive photos, objects, vintage posters, secret diagrams and decorative tiles from disused stations in one location for the first time, the exhibition reveals the mysteries of the Capital’s ‘abandoned’ Underground stations. Delve into the secret wartime histories of Down Street and Clapham South and discover the creative ways forgotten subterranean spaces are being adapted for today’s world. By popular demand the exhibition has been extended until the end of 2023.
Hidden London Hangouts on YouTube – new episodes each Saturday at 18:00
Hidden London Hangouts give everyone a chance to learn more about the Capital’s subterranean transport secrets with wit and humour from four loveable Londoners and experts in their field. New episodes are released on London Transport Museum’s YouTube channel every Saturday at 18:00. Visit www.youtube.com/ltmuseumvideo to see up and coming as well as previous episodes. Each episode is hosted by self-confessed Tube geek and broadcaster Alex Grundon.

Christmas presents for Hidden London fans
Hidden London book, mugs and oven gloves
People wishing to own a bit of disused station history can treat themselves or their friends and relatives this Christmas with an illustrated Hidden London book (Hardback, £25) published by Yale University Press. The book and a selection of other gifts inspired by the heritage tiles in disused Tube stations are available to purchase from London Transport Museum’s shop in Covent Garden and online. The Hidden London book is also available at other stores nationwide.