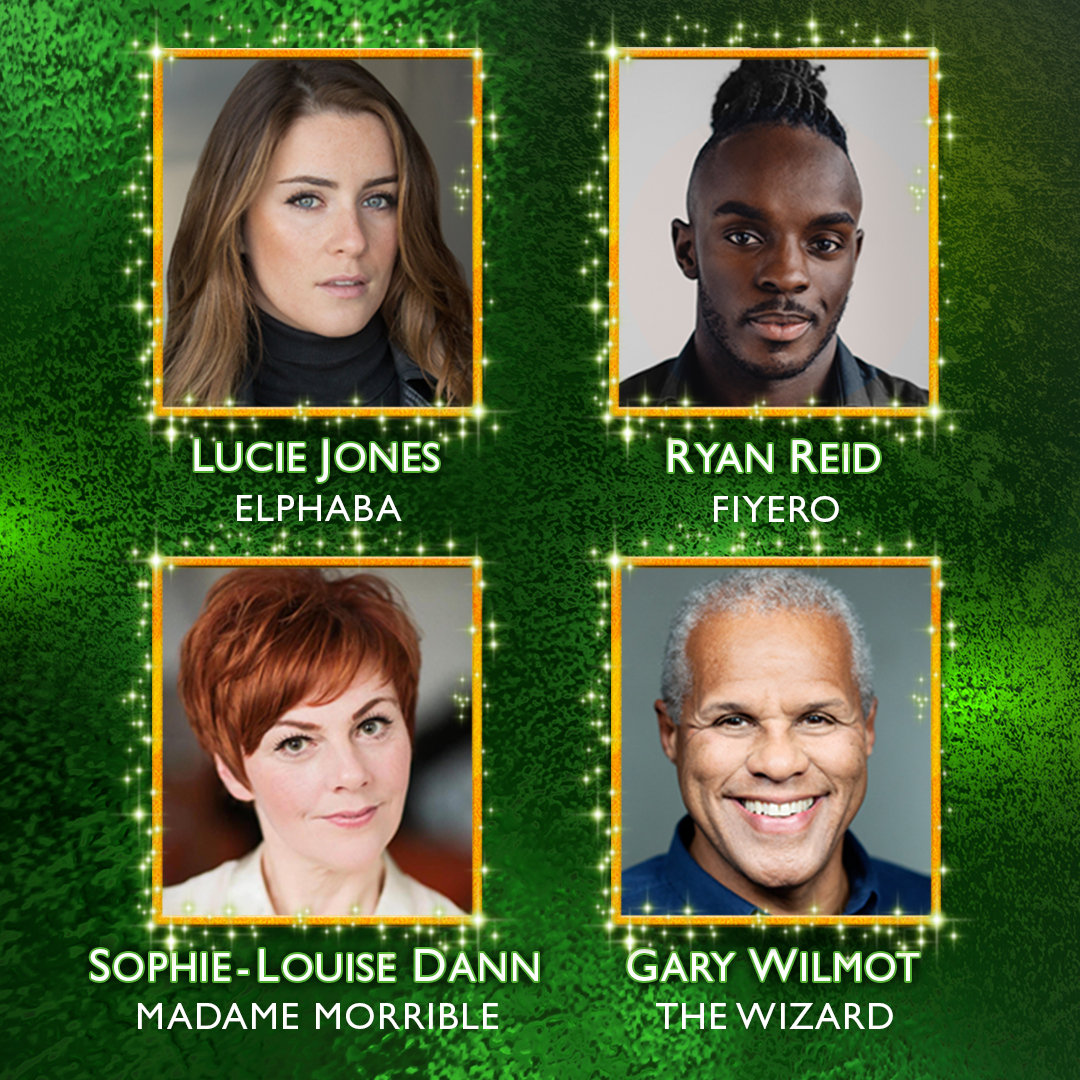 Wicked, the West End and Broadway musical phenomenon that tells the incredible untold story of the Witches of Oz, is proud to announce that Lucie Jones (Elphaba), Ryan Reid (Fiyero), Sophie-Louise Dann (Madame Morrible) and Gary Wilmot (The Wizard) will lead the new London cast at the Apollo Victoria Theatre from Tuesday 1 February 2022.

They will join Helen Woolf, who returns from maternity leave to continue her acclaimed performance as Glinda, Carina Gillespie (Nessarose), Nicholas McLean (Boq), Simeon Truby (Doctor Dillamond), Amy Webb (Standby for Elphaba) and Charli Baptie* (Standby for Glinda), who all continue in their starring roles.

“We’re thrilled to announce that the new cast of Wicked from 1 February 2022 will be led by the sensational Lucie Jones as Elphaba, West End ‘Dreamgirls’ star Ryan Reid as Fiyero, two-time Olivier Award nominee Sophie-Louise Dann as Madame Morrible and Gary Wilmot – whose prolific 40+ year career has made him one of the UK’s most popular actors and entertainers – as The Wizard. They will join Helen Woolf, who returns from maternity leave to continue her acclaimed performance as Glinda, together with 17 current cast members who continue with us, including Carina Gillespie as Nessarose, Nicholas McLean as Boq, Simeon Truby as Doctor Dillamond, Amy Webb as Standby for Elphaba and Charli Baptie as Standby for Glinda. We are also extremely proud to welcome Yuki Abe, Kofi Aidoo-Appiah, Alishia-Marie Blake, Pàje Campbell, Fergus Dale, Nicola Espallardo, Danny Fogarty, Laura Harrison, Amie Hibbert, Samuel How, Christian Knight, Jasmine Leung, PaddyJoe Martin, Harry Mills, Lewis Newton and Joe Thompson-Oubari to our ensemble.”

“One of the most successful musicals of all time” (BBC News) and now in its landmark 16th year, Wicked has recently extended booking to Sunday 27 November 2022 and plays Tuesday-Saturday evening performances at 7.30pm with matinees on Wednesday, Saturday and Sunday at 2.30pm. The following six extra Christmas shows have also been added:

Visit www.WickedTheMusical.co.uk for information and tickets.

Lucie Jones (Elphaba) is an award-winning actor and solo artist. Born in the Welsh village of Pentyrch, Lucie first came to national prominence as a finalist in ITV’s The X Factor in 2009, mentored by Dannii Minogue. Alongside her fellow contestants, she also featured in a 56-date sell-out national arena tour, The X-Factor Live, and recorded the number-one selling single You Are Not Alone. Lucie is starring until 27 November 2021 as ‘Jenna Hunterson’ in the UK Tour of the musical Waitress, a role she previously played in the West End, where her celebrated performance won her three awards. Her acclaimed and prolific career has seen her perform all over the world in both concerts and musicals, including her 2010 West End debut as ‘Cosette’ in Les Misérables. In 2017, Lucie was invited to take part in the live televised final of Eurovision: You Decide. After subsequently winning the public vote, she went on to represent the UK at the Eurovision Song Contest in Kiev, performing her song Never Give Up On You to a global audience of over 300 million people. Her acclaimed album, Lucie Jones – Live at the Adelphi, is available on CD and all streaming formats. Prior to joining Wicked, Lucie will be appearing in concert in Cardiff and London on 13 and 14 December respectively.

Ryan Reid (Fiyero) trained at ArtsEd, graduating in 2013. He was in the original London cast of Dreamgirls, directed by Casey Nicolaw, subsequently taking over the leading role of ‘Curtis Taylor, Jr.’. Ryan’s other credits include ‘Marvin’ in Sweet Charity at the Donmar Warehouse; Lin-Manuel Miranda’s In The Heights at the King’s Cross Theatre; the original UK Tour of Shrek The Musical and Blues In The Night at the Hackney Empire.

Sophie-Louise Dann (Madame Morrible) is a two-time Olivier Award nominee. Her many starring roles in the West End include ‘Celia’ in Gary Barlow and Tim Firth’s musical The Girls; ‘Paula Paxton’ in Gurinder Chadha’s Bend it Like Beckham; ‘Barbara Castle’ in Made in Dagenham, alongside Gemma Arterton, and, most recently, ‘Fergie’ in The Windsors: Endgame. She has appeared extensively at theatres and concert halls across the UK, including as ‘Madame Thénardier’ in the UK & Ireland Tour of Les Misérables, ‘Mrs Lovett’ in Sweeney Todd (Mercury Theatre, Colchester) and ‘Widow Corney’ in Oliver! (Grange Park Opera). In Paris, she played ‘Dot’ opposite Julian Ovenden in Stephen Sondheim’s Sunday in the Park with George (Théâtre du Châtelet).

Gary Wilmot (The Wizard), the much-loved actor, singer, comedian, impressionist and presenter, first came to national prominence on the popular ITV show New Faces in 1978. Over the subsequent 40+ years, his prolific career has encompassed hundreds of television appearances, with shows including Cue Gary! (ITV), Saturday Gang (LWT), Copy Cats (LWT) and the spectacular Showstoppers (BBC1), and multiple stage roles, including his acclaimed West End debut in 1989 as ‘Bill Snibson’ in Me and My Girl, ‘Joe’ in Simon Callow’s production of Carmen Jones (The Old Vic) and, most recently, ‘Jethro’ in The Prince of Egypt and ‘Elisha Whitney’ in Anything Goes. His now legendary performances in pantomime at the London Palladium include Goldilocks and the Three Bears, Dick Whittington, Snow White and the Seven Dwarfs and Pantoland. He has appeared on the Royal Variety Performance, been the subject of This Is Your Life (1986) and received an MBE in the 2018 Queen’s Birthday Honours List for services to Drama and Charity.

Already the 9th longest running musical in West End theatre history, Wicked has been “wowing London audiences for 15 years” (Sky News) and has now been seen by more than 10 million people in London alone (and 60 million worldwide). “The global sensation” (Independent) is the winner of over 100 major international awards, including three Tony Awards, two Olivier Awards, a Grammy Award and ten theatregoer-voted WhatsOnStage Awards (including ‘Best Musical’ and three for ‘Best West End Show’).

Based on the novel by Gregory Maguire, Wicked imagines a beguiling backstory and future possibilities to the lives of L. Frank Baum’s beloved characters from The Wonderful Wizard of Oz and reveals the decisions and events that shape the destinies of two unlikely university friends on their journey to becoming Glinda The Good and the Wicked Witch of the West.

Wicked has music and lyrics by multi-Oscar, Golden Globe and Grammy Award winner Stephen Schwartz (Godspell, Pippin, The Prince of Egypt, Disney’s Pocahontas, The Hunchback of Notre Dame, Enchanted and its forthcoming sequel Disenchanted). It is based on the bestselling novel Wicked: The Life and Times of the Wicked Witch of the West by Gregory Maguire and written by Emmy and Tony Award nominee Winnie Holzman, creator of the landmark American television series My So-Called Life. Musical staging is by Tony Award-winner Wayne Cilento with direction by two-time Tony Award-winner Joe Mantello.

The Apollo Victoria Theatre, owned and operated by the Ambassador Theatre Group, maintains stringent public health and COVID-secure audience protocols throughout the venue. On arrival, as well as showing an eTicket, audience members over 18 will be required to show an NHS COVID Pass* detailing either Full Vaccination, a Negative PCR/LF Test OR Natural Immunity. The venue also operates cashless payments (including Apple Pay and Google Pay) and at-seat ordering/delivery as well as enhanced cleaning practices and increased air flow. Sanitation stations are available throughout the theatre, including at entry doors.

All theatre staff wear face coverings, and, for the safety of all patrons, it is expected that audience

members will wear face coverings when entering and moving around the venue and while seated.

The Rubens at the Palace is the official hotel partner of Wicked London  www.rubenshotel.com