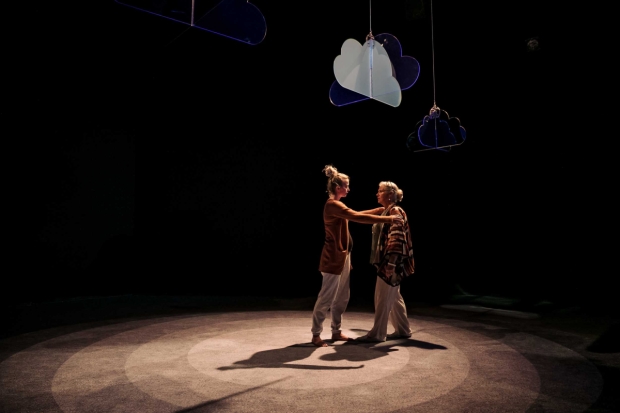 Focussing on small theatres we have:

We are watching a great performance by Sophie Melville as a new mum who fears she can’t look after her baby properly. Writer Morgan Lloyd Malcolm has captured the utter exhaustion that many (?most) mothers of a baby feel following the birth of a baby.  Even worse for the first-time very young mother, especially, as in this play, she is given advice from her own mother, her mother-in-law and best friend.  She has a husband but he is not shown here.

Nina (Sophie Melville) welcomes the offer by her mother-in-law (Denise Black – who also plays Nina’s own mother ) to take the baby for one night so Nina can enjoy time with her friend, Jackie (Cat Simmons).  But during the evening Nina gets the phone call that all parents dread – there is something wrong with the baby, who has been taken to hospital.  The nightmare begins for Nina as she faces the agonies of doctors and court deciding the future of her baby.

A very energetic production by director, Abigail Graham, sees Sophie Melville tearing around the stage at times barely able to hold herself and her emotions together. Recommended, but with a warning: do not see if pregnant or a new mother!

And then we have something completely different!

The small theatre with a big heart – Upstairs at the Gatehouse is a little gem in Highgate, north London, with a super restaurant downstairs!  It has a well-deserved reputation for putting on small-scale musicals.  Whilst this is not a musical it is about a legend of song, Barbra Streisand and a very famous comedienne, Joan Rivers. Rosanna Harris and Mia Tomlinson look and sound like the two stars as they play out a fictional couple of scenes showing meetings between the two.  In the first scene they are in a somewhat grubby off off Broadway theatre performing in a play about lesbians.  Streisand’s mother has come to see her and Barbra has to be coaxed by Joan into going on stage.

In the second scene, Streisand is a mega star and when Joan visits her in her glitzy Las Vegas dressing room the two show how envious they are of each other’s success.

Lots of Jewish humour and digs at their mothers, it is a joy to watch the consummate performers inhabiting the famous stars in this well put together production.