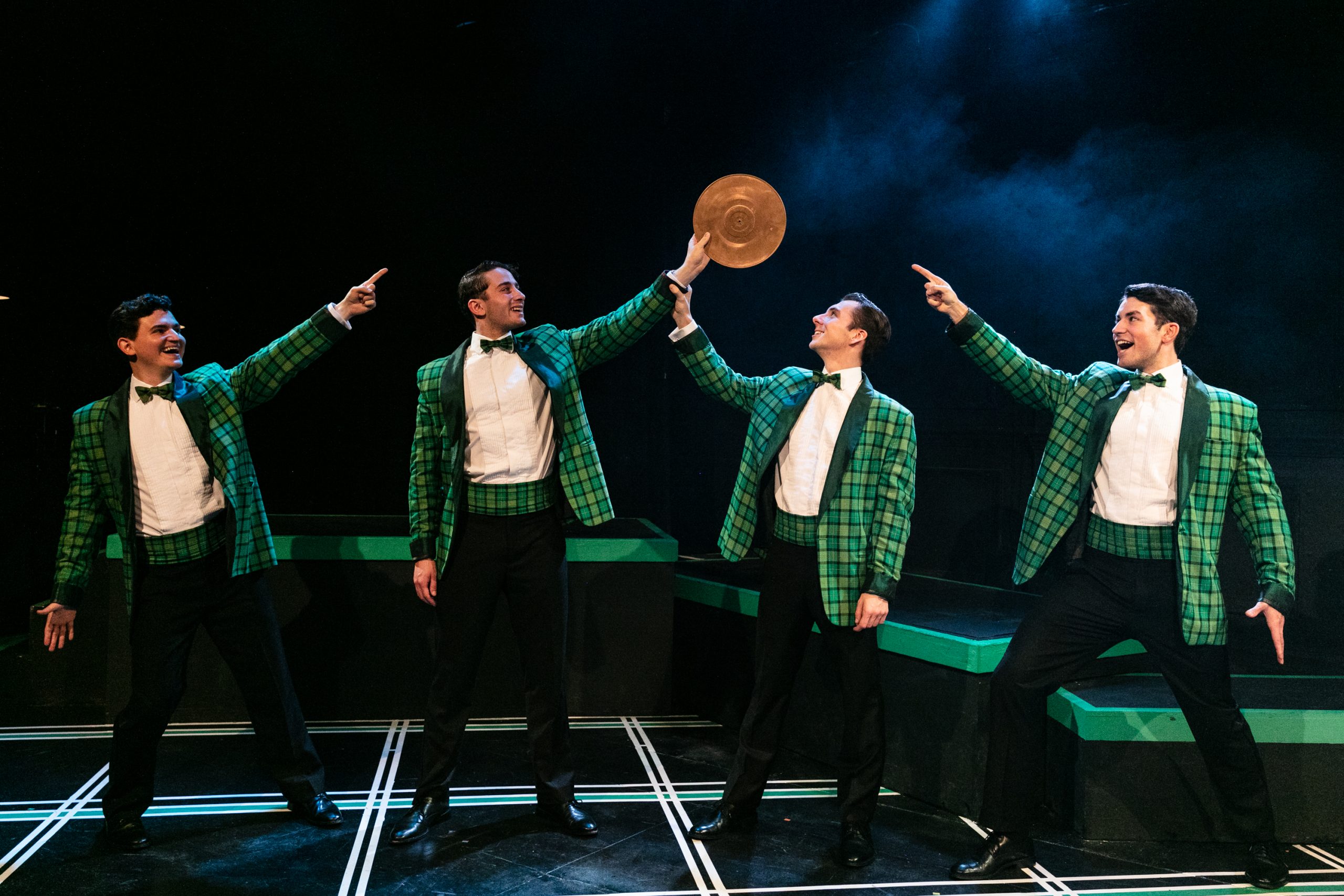 This is a delightful show at the super tiny Upstairs at the Gatehouse theatre. Telling the story of a boy band from New Jersey in the 1950s, we see a typical group of the time. Rather than just the usual trawl through their life together, this show has the unusual story-line of the fictional group dying in a road accident.

However, they get the chance to perform the concert they always wished to do before they actually enter heaven. Really, though, the main part of the show is the quartet singing together in front of us the audience at their last ever concert.

This provides the opportunity for some lively renditions of classics including: Three coins in a fountain; 16 Tons; She loves you yeah yeah yeah; Catch a falling star; Day-O; Love is a many splendid thing.

They wear white jackets and bow ties most of the time, adding bits of tartan as appropriate plus lots of other props as required. The lads have lots of energy, move well together and work in delicious old-fashioned harmony. The four boys, Frankie (Cameron Burt), Jinx (George Crawford) Smudge (Christopher Short), Sparky (Alexander Zane), are excellently directed by John Plews who has them mainly sitting on stools holding microphones and simply singing. There are some intervals of slapstick but the best part is the group just singing together in sweet harmony.

The boys are very well supported by the musical director, Ian Oakley and Jess Martin on the double bass.

This is a delightful show and there is a lot of joy to be had in seeing this well-performed musical at the Upstairs Gatehouse Theatre.

Death of A Black Man 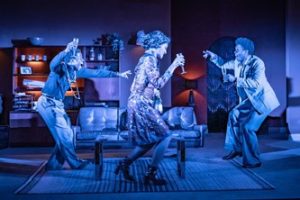 A lively production of a play which deals with race, class, gender and other issues we are currently addressing.  The difference here is that the play had its premiere at Hampstead Theatre in 1975 and dealt with themes prevalent in the 1970s!

But many of the issues highlighted here are the same as we find today. The play shows 18-year-old cricket loving Shakie (Nickcolia King-Nda) in 1973 England welcoming 30-year-old Jackie (Natalie Simpson) his ex-lover and mother of a child he fathered at the age of 15. Shakie also has another visitor, his friend, Stumpie (Toyin Omari-Kinch).

While Shakie is into selling so called African chairs, which are actually made in England, to well-heeled Chelsea buyers, Stumpie is promoting black music.

The death refers to a character based fairly loosely on Joe Harriott, a Jamaican jazz musician who played the saxophone fantastically but died in poverty.

Once the lads think about ‘selling’ Jackie on the King’s Road, the play becomes altogether darker. Written by Alfred Fagon, who himself had an untimely death at the early age of 49, the play has some pithy dialogue and catches the different characters well.

Drinking champagne, the three have some lively moments together. Particularly well-acted by Simpson, all three actors give powerful performances.

We know we are back in the theatre when we see the set – how good it is to see a set in 3D!  Well directed by Dawn Walton, the play gives a vivid interpretation of life for Black people in the early 70s.

Whether it is pushing for the rights of Black people or showing a bit of anti-Semitism, the play looks closely at issues of importance.

For once it is worth buying the programme which has articles on the play, on the playwright and the 1970s era.